Going to the Quilt Show!

Sometimes I get too wrapped up in the business side of quilting and forget why I ever started quilting in the first place.

If you've been following my blog, then you already know that I took a break from making quilts this summer and had sew much fun rediscovering all of the wonderful antique and vintage fabrics, blocks, and quilts that I have accumulated over the years -- some items predate before I even began quilting.

With that in mind, I decided it was time to go to a quilt show just for fun.  It's been years since I've done this -- it was way overdue.

I went to Erie PA for the Quilting on the Bayfront show. The last time I went to this show was several years ago when it was the first time in this venue and I was disappointed.  It wasn't because of the show that I was disappointed, but because the show sponsored by Millcreek Sewing and Fabric previously had been held at the Chautauqua Institution in NY.

Quilting Around Chautauqua was my favorite experience (yes it wasn't just a show, it was an experience) because three friends and I used to rent a cottage and would spend five days immersed in quilting, the ambiance of Chautauqua, and friendship!  I really miss that.

So when the show changed venues, it made me very sad.

Fast forward a couple years and I was ready to see the show with different eyes.

So off I went to the quilt show!

The quilts greet you right after you pay your admission fee in the central hallway.  The backdrop behind the quilts was a wall of windows overlooking Lake Erie.  The ship you see here is the USS Flagship Niagara. 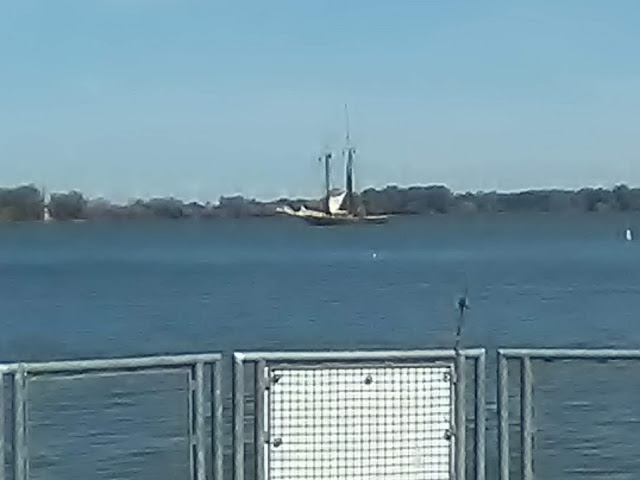 The show was set up in a large single room with quilt displays from area guilds lining the walls and vendors in the middle.

At the back of the room were some awesome quilt displays set up as rooms.

The first one is a "quilt shop" vignette.  I apologize, but I didn't take a photo of the quilter's name.  Nonetheless, I found it very charming. 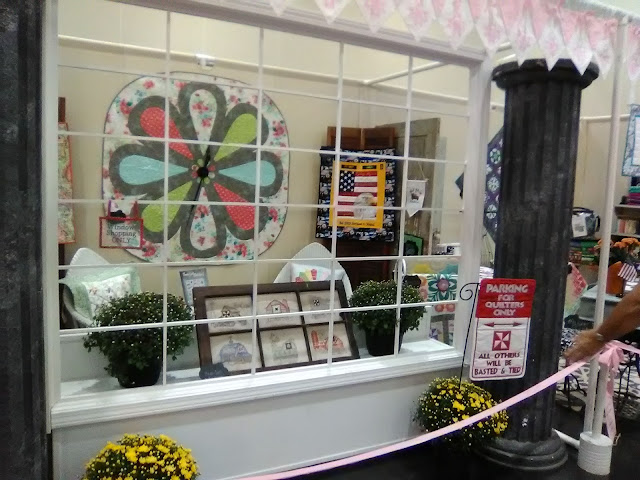 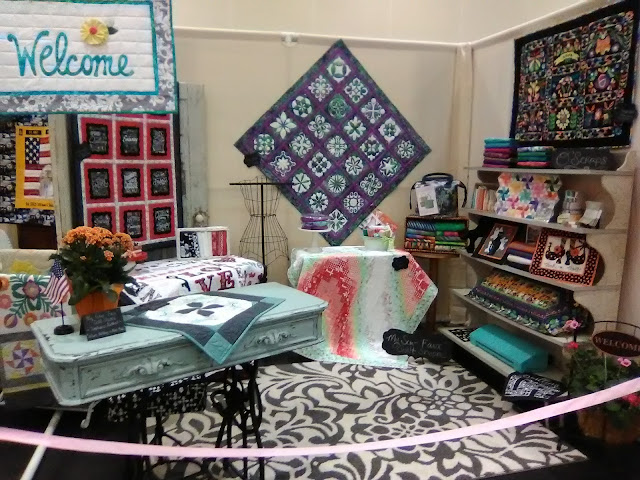 This next displays were created by my longtime friend and amazing quilter Marcy Scott, who also works at Millcreek Sewing and Fabric. 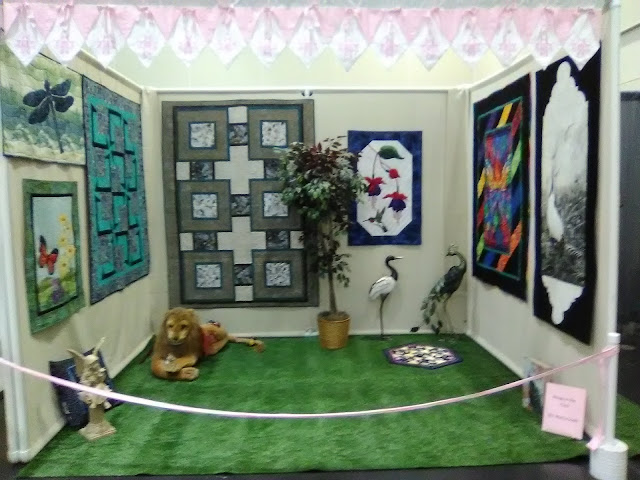 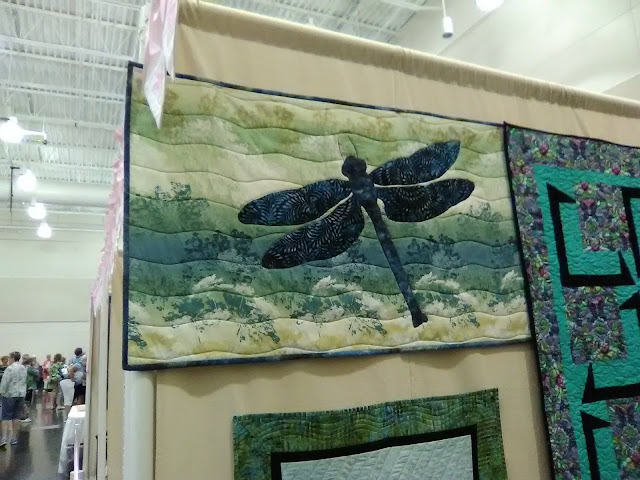 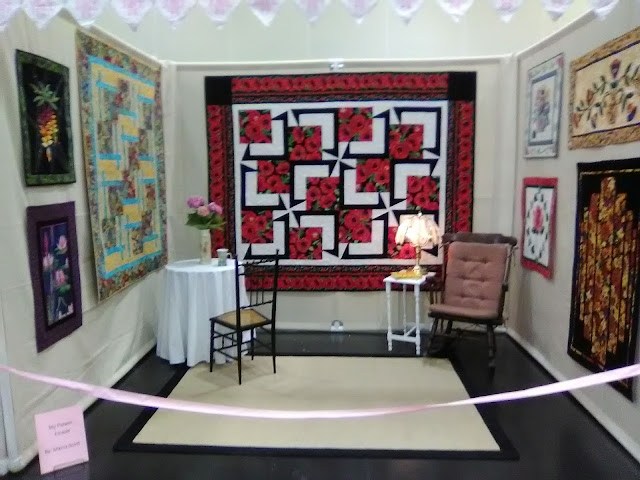 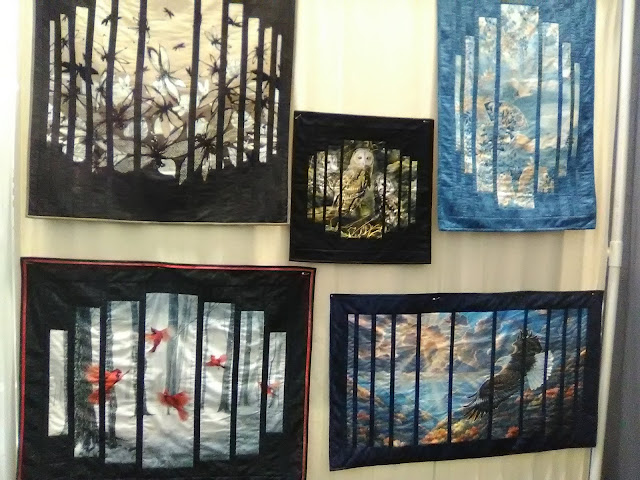 I had a wonderful surprise after I started perusing the vendor booths -- I discovered my friend Leslie was there too!  I don't know why we didn't communicate with each other and go together.

Another friend, Cathey, of Cathey Marie Designs, who is the creator of the Y Block Ruler, was there vending for the first time.  She said she did at least 100 demos during the show!  Here she is doing her ruler demo to a group of eager quilters. 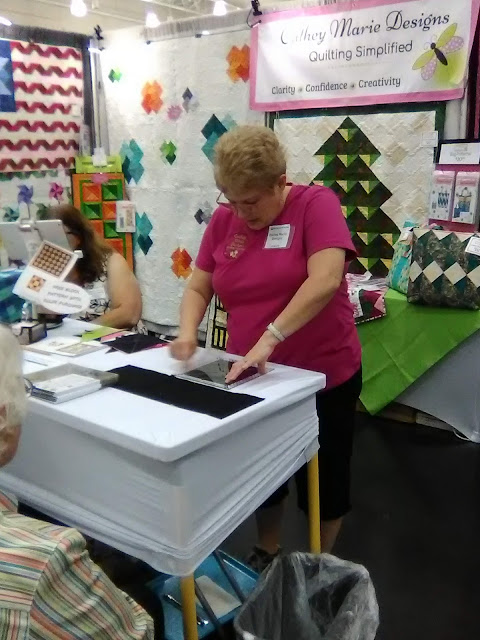 Leslie and I teamed up for shopping and egged each other on.  Although she had already made the rounds of the vendors, she humored me and visited them all again.  Along the way, we stopped and chatted because many of the vendors were old friends.  We also met a lot of new friends who were vendors, too.

I had a great time and even picked up some fun charm packs and a wooly sheep pattern (along with an assortment of felted wools).

I am definitely looking forward to next year's show.  Maybe I'll see you there! 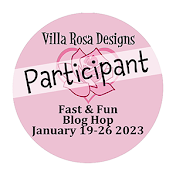 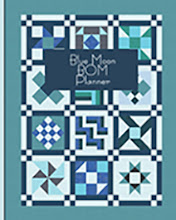 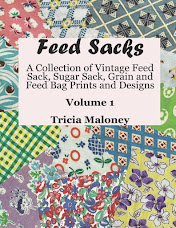 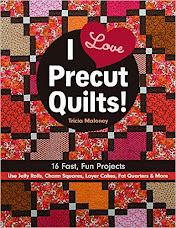 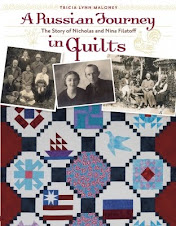